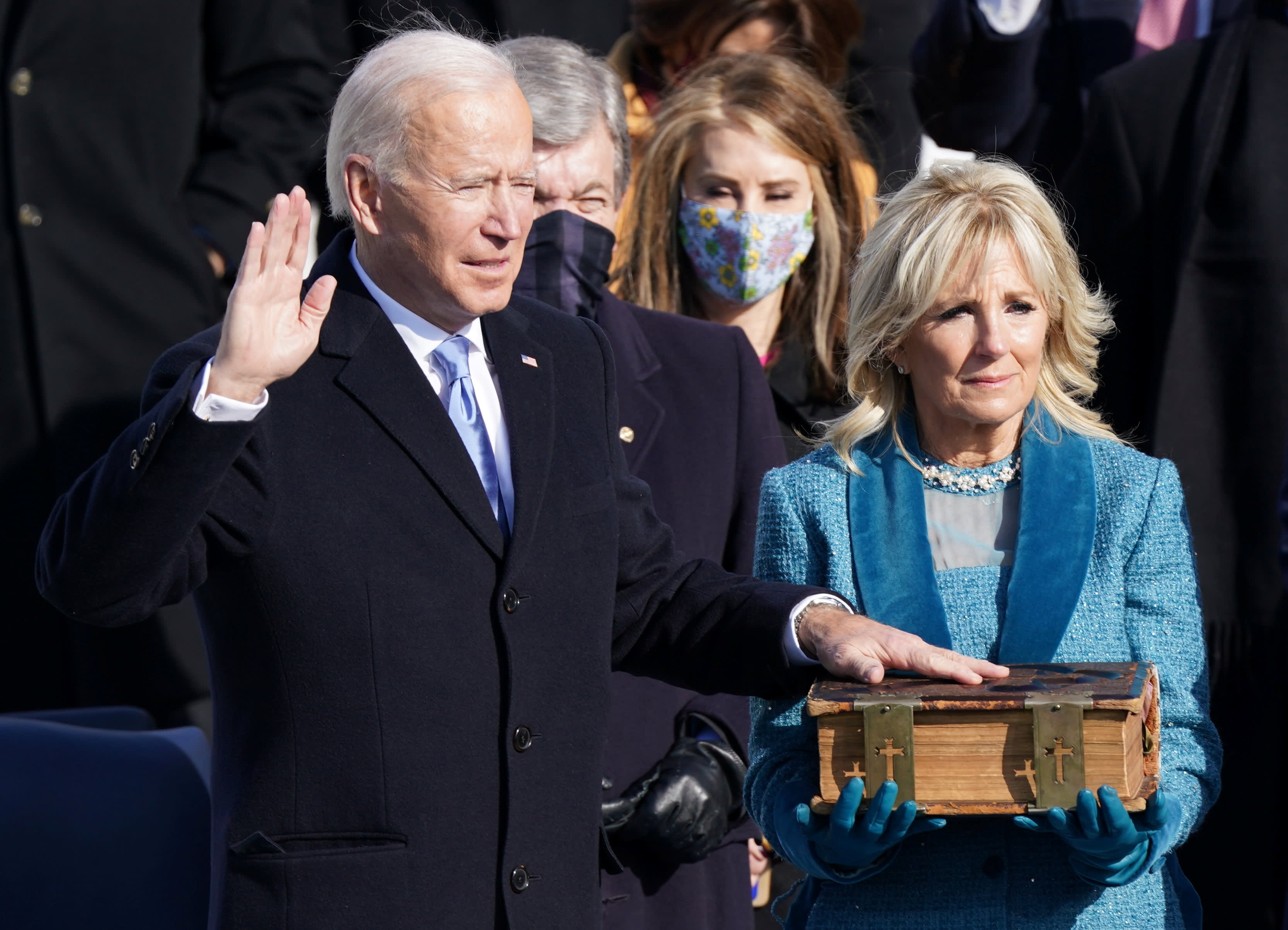 Joe Biden is sworn in as the 46th President of the United States on the West Front of the U.S. Capitol in Washington, January 20, 2021.

Inaugurated in a fortified Washington under the shadow of the coronavirus pandemic, the 78-year-old Democrat took the oath of office at the U.S. Capitol in front of a sparse bipartisan crowd. He enters the White House exactly two weeks after a mob inflamed by his predecessor, Donald Trump, stormed the Capitol, disrupting the transition to Biden’s administration and leaving five people dead.

Biden took the oath of office from Supreme Court Chief Justice John Roberts, with his left hand on a family Bible. Speaking after becoming president, he declared, “Democracy has prevailed.”

Biden, the oldest American president, faces swirling crises as he and Vice President Kamala Harris take power. At 56, she becomes the first woman, first Black American and first South Asian American to become vice president. Biden will try to streamline the biggest vaccination effort in U.S. history to contain a virus that has claimed more than 400,000 lives nationwide.

Biden will aim to boost an economy in which about 18 million people are receiving unemployment benefits and food banks experience demand unseen in decades. He will try to implement a broad agenda while navigating a country where millions of people, including members of Congress, fed disinformation by Trump question the legitimacy of his victory in the November election.

Democrat Biden won the presidency in November in his third try. His first attempt came during the 1988 presidential cycle, followed by a 2008 primary loss to his future boss Barack Obama.

Biden served two terms as Obama’s vice president from 2009 to 2017. He took the job after 36 years in the Senate representing Delaware, a state Biden has said “will be written on [his] heart.” Biden joined the Senate when he was 30.

The president ran last year as the person best equipped to defeat Trump. Concerns bubbled within his party that his record on racial justice and the social safety net left him unprepared to confront the country’s challenges. Biden pledged to “restore the soul of America,” and clinched his party’s presidential nomination after early stumbles.

Campaigning during the pandemic, Biden aimed to show a compassion built through tragedy. He often opened up about the deaths of his first wife, Neilia, and young daughter, Naomi, in a 1972 car crash, and his adult son Beau’s passing from brain cancer in 2015.

Biden enters office trying to curb the pain wrought by the pandemic. Working with narrow majorities in the House and Senate, he will first try to pass a $1.9 trillion coronavirus relief package. Other Biden priorities include health care, immigration and climate change — some of which he will start to address with executive orders on his first day in office.

The Democrat throughout his campaign contended he could win Republicans to his cause, especially because of his relationships in the Senate. The next two years will test his sway in a Trump-centric GOP. Democrats will need 10 Republican votes to pass most legislation in the chamber.

The shadow of Trump

Trump’s presence loomed over the day’s ceremonies. He became the first president since Andrew Johnson in 1869 not to attend his successor’s inauguration.

He left the White House for Florida on Thursday morning, hours before Biden took his oath of office. After he gave brief remarks to supporters, Trump lifted off in Air Force One while Biden attended a Catholic mass with masked Democratic and Republican congressional leaders.

McCarthy, House Minority Whip Steve Scalise, R-La., and Sen. Ted Cruz, R-Texas, were among the lawmakers who voted against counting Biden’s win in Congress hours after the Capitol attack and then attended his inauguration.

The inauguration took place with a smaller crowd, faces covered to slow the spread of the virus. The Jan. 6 insurrection, during which some rioters smashed their way into the Capitol and called to “Hang Mike Pence,” led to tightened security.

Streets around the Capitol were closed Wednesday. More than 25,000 National Guard members patrolled Washington in a show of force.

The National Guard vetted forces amid concerns about insider threats, removing two people for “inappropriate” comments and 10 more for other reasons.

This story is developing. Please check back for updates.

Economists see first signs in data that vaccine is working
Another stimulus package is on its way. Here’s what to do with the aid
Senate Democrats to reduce jobless aid boost in Covid relief bill but extend it another month
The spring housing market just lost more than 200,000 new listings
Free weekly credit reports extended for one year, giving you opportunity to check for errors